Sure is cold out these days. And that brings to mind a winter-y story originally told by one of North Yarmouth’s best storytellers, Gordon Corbett in 2007. Gordon passed away in December, 2020, and we miss him to this day. New owners now live at 411 Walnut Hill Road (across the road from Trudy Bird) but for many 411 is still the Corbett place … same way that Trudy Bird is still “used-to-be-Stones”!

Enjoy this story about North Yarmouth back in the 1970s. And if you burn wood, keep an eye on that chimney, folks!

It was a cold February day in 1976 when my wife and I moved into 411 Walnut Hill Road with our 1½-year-old daughter Erica. The furnace was totally inadequate and the handsome fireplace only served to cool the place off whenever I lit a fire in it. There would have to be some serious improvements … if not, this place was going to put us in the poorhouse—and that was at 1976 oil prices!

A new furnace was out of our budget, but we did have enough money set aside so we could at least restore the chimney. Our good friend Shirley Fountain, who grew up in the house, had told us stories of her childhood when the old space and compartment behind the chimney was used to store Christmas and birthday presents. After a pretty serious chimney fire that nearly burned down the old house, though, the damaged flue was taken apart but not replaced; instead, a “new” hot air furnace was installed. A reminder of that fire was the still-charred and blackened timber that could be seen in the exposed heavy beams that supported the second floor.

But a stove and chimney had once worked here, and it would again—that was my brainstorm! I would restore the chimney and build a handsome hearth. We weren’t new to stoves and wood; we had kept our previous Falmouth cottage warm by burning wood in a 1911 Magee Clinton kitchen cookstove which we still owned.

But there were problems: 1: The Clinton was too big for our North Yarmouth house; 2. You had to be around to feed it wood constantly; and 3. It would not hold a fire overnight. Sadly, the Clinton would not work for our busy young family.

What we really needed was one of those automatic, damper-controlled, airtight stoves that could take a good-sized piece of wood that could make it through the whole night. That would give us real heating comfort and security! I had plenty of good dry wood and could get plenty more with my old pickup and chainsaw.

We hired a local mason who built us a new chimney and hearth to fit perfectly into the house. When he was finished, it looked as though they had been there for years. With the purchase of a combination coal/wood burning airtight stove, we were prepared for the coming winter.

When the cold weather arrived, I lit our new stove, and what a welcome difference it made! It was wonderful to have a warm house no matter what Old Man Winter threw at us. We were going to be comfortable from now on.

This stove threw off heat like nothing I had seen before and would hold a fire all night long and be ready to go again the next morning with a welcome bed of hot coals. My, my! What peace of mind! My growing family, which now included baby Katie, would never be cold again. I felt like a real husband, father, son-in-law and yes… a real man! I was providing comfort for my family with every load of wood I carried in from the woodshed. The wood I had cut and split and stacked myself. I was their hero! It felt good.

The heating season had begun early in November of 1976 and required lots of wood. I had no complaints, however, for the family was toasty warm. Every morning just after rising I would shake down and stoke the stove for the day.

On one of those mornings during a mean February cold snap I was in the bathroom shaving when I heard a knock on the back door. Who would be calling so early? I opened the door and found a fellow in work clothes along with his son. Their pickup was idling in the driveway.

“Good morning. Can I help you?” I asked, thinking that they were unfamiliar with the area and were in search of someone’s house.

He replied, “Well, I thought you might like to know…you got a wicked good chimney fire going.”

Random thoughts raced through my head—Yes! I would like know that … WAIT! Umm…NO! I DON’T want to know—Oh my gawd! What do I do? Do something!! NOW! WHAT? 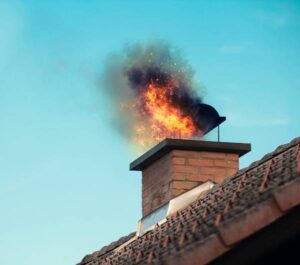 I ran out, stepped off the porch and looked up. He was right! I certainly did have a wicked good chimney fire going!! Ugly yellow and dark smoke was belching several feet up into the cold morning air with scary looking orange, red, and yellow flames roaring out of the chimney top. I thanked my visitors and sprang into action.

I grabbed the phone and called in to report the fire. When asked the location I blurted, “Shirley Fountain’s old house!” That seemed to work. I hung up the phone and only then was conscious of a loud roar like the sound of a jet engine coming from the chimney. It was at this moment that I saw the North Yarmouth fire truck pull to a stop in my drive. I thought, “Holy cow! What service! That’s got to be the fastest response on record!”

Sid Smith stepped out of the truck and told me that the rest of the boys were on their way. Was I ever glad to see Sid! He had been over to Reardon’s store (now Trudy Bird’s) having breakfast when he spied my chimney fire. He’d walked up the street to the Firebarn and was already in the fire truck and on his way even before I called.

And before I could get upstairs to alert my wife and family, the rest of the boys certainly had arrived, with more still on their way. They piled in through the door, some headed for the roof, others rushing past me and up the stairs with all their gear, for this was serious business.

Now, during those years Ruth and I slept in the room that the chimney passed through. And did I mention that she usually worked the late shift at the hospital? Well, she had, and and was now sound asleep—when several strangely attired and serious-sounding men burst into the bedroom shouting into their radios and to each other.

At this sudden and incomprehensible awakening she couldn’t do much but slide down deeper under the covers, leaving enough clearance to peek out and wonder who these people were and what they were doing in her bedroom.

Thanks to the fast response and action by the North Yarmouth Volunteer Fire Department, the chimney fire was brought quickly under control and the excitement was over, although my adrenaline was still pumping. Our house, as well as my family, was safe, including a somewhat still-flustered Ruth.

It was quite an adventure that I do not want to repeat ever again. The airtight stove was replaced with a much safer one, and several years later a new furnace was installed when the old one bit the dust. Along with a planned program of annual inspections and cleanings, the chimney is in better condition, our house is safer, and my mind is at ease.

I don’t have an official count on how many chimney fires there are in the state of Maine every year and I don’t need to. It is enough to know that we had one in our own home and that experience was enough to last me a lifetime. I have a responsibility to my family and this old house to see that I do everything I can to see that it doesn’t happen again … this old house in “Our Town,” that I hope will stand for many, many more years to come, where new people will live, and new stories will be born.