Hey folks—how about a good story? This one originally appeared in a 2006 Gazette, and it’s a great summertime tale. Is it cautionary? You be the judge!

Sweet — or Sweat?  Why I Decided Not To Be a Farmer

by Holly Hurd … and Earle Hayes

Mark Heath’s grandfather Charles “Earle” Hayes kept a diary in the year 1923 that records his working and social life and includes many interesting details about people and goings-on around North Yarmouth.

Earle was born in 1900 at the Wescustogo Hill farmhouse built by Earle’s great-grandfather Jacob Hayes, Jr.  (now owned by the Nanovic family). The homestead had been successfully farmed by three generations of Hayes before him. So it seems natural that Earle would follow in the footsteps of his ancestors and take up farming. But … would he?

At the diary’s start, Earle is working at Haven’s candy store in South Portland. 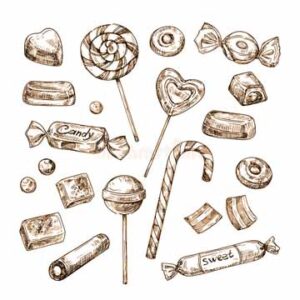 In May, though, Earle moves into a farmhouse nearby his uncle and two brothers (the house currently located at Anderson’s Landscaping on Route 9) and spends the next six months trying his hand at farming.  By year’s end … well, read on. 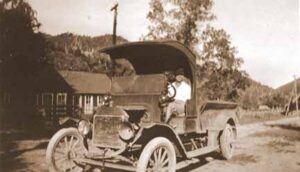 May 28  Went in town in AM and got license for truck and driver’s license at City Hall. Then went in town and got Ford truck of H. G. Hawkes . . . I learned a lot about driving and drove about 1/2 way. The radiator leaked and we soldered it.  Didn’t get back until 11 PM.

May 29  In PM, I took my leaky radiator off and Hawkes gave me another.

May 30  In the AM Fred Skillins and I started for Auburn  . . . We had 4 blowouts and got on wrong road. One hill we had to back up.  Then the carburetor began to leak and Fred patched that up.  We got home about 7:30 PM.  I stayed with Fred all night.

Earle had owned the truck for 6 days.  Back to walking. 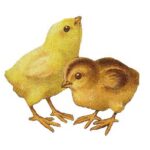 Next, Earle plants a garden and tries poultry.

June 23   My chicks came from Springfield Mass.  I paid $6.00 for 50.  They sent 51 all Barred Plymouth Rocks . . .  I worked most of day taking care of chickens and trying to get them settled with new hens but couldn’t until after dark.

June 28  Two chickens disappeared last night and I lost one today making 13 lost out of 51 bought.

July 4   Have saved one chick which got hurt by stuffing it with buttermilk with an ink dropper.

July 14   We hayed all day . . . finished piece over by Hoey’s  . . . I threw little water on horses.  They jumped and broke mowing machine driving rod also box which connects driving rod with wheel.  Cracked a piece of the frame off.

July 23  I mowed everything on this side of road on our place today.  In PM I went over to Francis’ with horses and rake. We got in 1/2 –2 horse load which I cleaned up the last piece we started over there.  Then we had a thunder shower and couldn’t do anything with my hay.

Aug 20  I went down to Geo. Smith’s and got their old horse (Maud) that they want to give away.  It is 28 years old but quite smart.

Aug 30  Saw the manager of Kresge’s five and dime store.  Guess could have job at $25.00 per week. Also Mr. Spear thinks there will be an opening in Auburn.

Sept 3  In AM I went over home and dug awhile on grave for old horse. (Earle had his “free” horse for about two weeks.)

Sept 7   I took horse that Smith gave us and buried it over home.  Francis helped me dig about 1/2 hour.

Sept 8   I worked for Elmer Sawyer. Thrash my oats. We got engine and thrasher at M. E. Hayes and went over to Jerry Connors. Going down hill back of Al Titcombs the outside girt broke and horse started to run some.  It could not hold back a bit.  Elmer was ahead and turning out for 2 autos. So I had to steer horse into him.  It jumped on the back part of engine rigging cutting its front left leg. They had Dr. Tuttle sew it up . . . It was a miracle that horse wasn’t hurt worse or that I wasn’t hurt.

Sept 20  I called to see Spear. He showed me all through their candy and ice cream store.

Oct 20   Stuck a pitchfork in my leg about 2 in. above my left knee. Went in deep. Awfully lame and swollen.

Oct 28  I let Dolly (horse) out to feed. When I tried to get her she started.  I chased her way over to Britt’s (more than 2 miles away).

Got his horse and caught her over on Frank Sawyer’s land  (another 1 1/2 miles, by the Congregational Church).

Oct 23  Hunted around for a steady job at candy making but couldn’t find one.

Postscript: Earle went on to open his own candy store in Yarmouth, on the spot of today’s Handy Andy’s—he advertised it in the 1925 NYA publication “The Courant”—and later ran a very successful store in Gray for many years.

There are no upcoming events at this time.