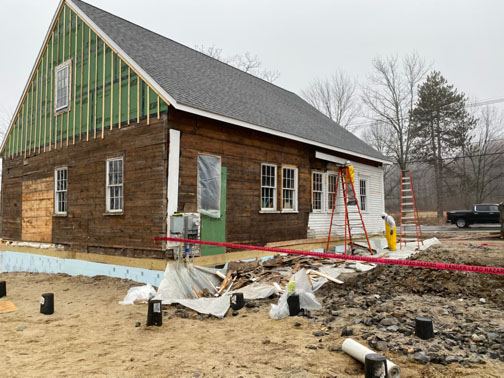 If you’ve driven by Old Town House in the past couple of days, you’ve seen yet another change in the building. The clapboards, painted over the years with lead-based paint—as identified by Resurgence Engineering—have been carefully removed. Strange to see workers in yellow hazmat suits at work on the building!

Lead paint is serious business. Scraping and sanding releases lead into the air, and exposure to lead can cause some serious health issues like chronic fatigue and cognitive impairments. It can also cause developmental deficiencies in children.

We chose to have Abatement Professionals carefully remove and encapsulate the clapboards and give Old Town House a new lease on life with new siding. For the moment the building looks strange … but how fascinating to uncover its underpinnings! 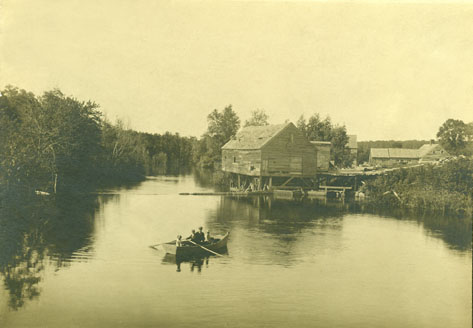 And considering the pride residents must have had in their newly-configured 1849 town, we imagine the boards probably were probably sawed at a local mill—perhaps Marston’s Mill off Milliken Road where Chandler Brook crosses. That mill closed sometime in the 1850s.

During that same time period the Porter/Hayes mill started operation; it was once located on the Royal River off Mill Road. At left is a beautiful 1892 image of the mill, when the Royal River was dammed and a mill pond created, big and deep enough for a rowboat, catching eels, or swimming.

Either mill was within a couple of miles of Old Town House’s original location on Route 9. 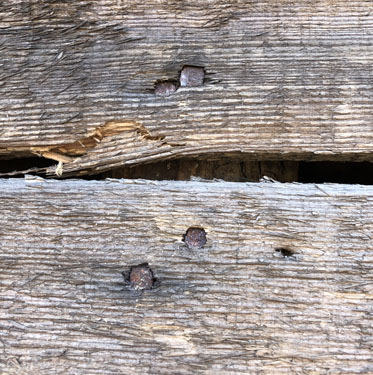 We found both square-headed, machine-cut nails (top of photo) and round-headed nails (two at bottom of photo) used on the sheathing.

The older square heads first appeared in the 1830s and were a boon to builders at the time, since a mechanized process sped up construction. The later round-headed nail heads were probably used when Old Town House underwent a big renovation in 1918-1919, after residents voted to raise $400 ($9,000 in today’s money) to “repair” the Town House. 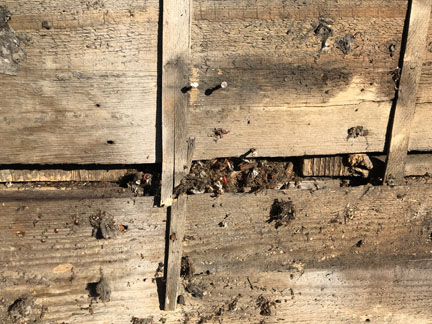 And of course we found evidence of mice, who nested comfortably until last December. Crumbling bits of old brush, dust, and fabric must have made a cozy shelter. But one of the Copp Movers crew spied a few rodents scrambling away from underneath Old Town House as it was lifted onto a flatbed last December. Hope they’ve found a new home!